John, fosterling and youngest employee of our school, may be on the brink of society all his life. As a three-year-old, he fell ill with malaria. But because he was never treated, he retained permanent brain damage. His intellectual abilities are severely limited. His uncle, who grew up with him, did not have the money or the knowledge to give him treatment. But he was a caring uncle. He loved and nurtured John like his own son. Today, with his uncle sick, John takes care of him. Like a son cares for his sick father. 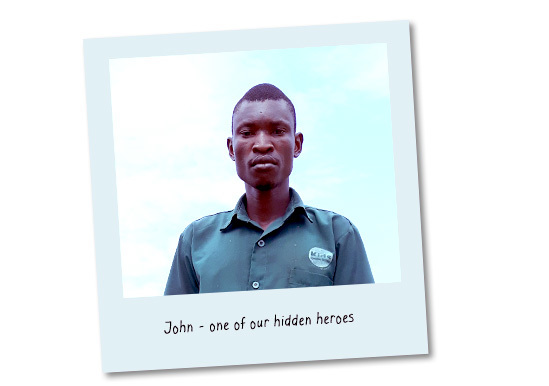 John is about 17 years old. He lives in our Kids Pioneers School. It is only a few kilometers from the settlement where his uncle lives. We liked John from the beginning. That’s why we created a job for him in our school. Today he guards our animals: pigs, a few chicken, a goat and two dogs. He found his place with them. Because his heart beats for “his” animals, you can feel it immediately. He does not leave their side. He even prefers to sleep next to them – that’s how much he cares for her. 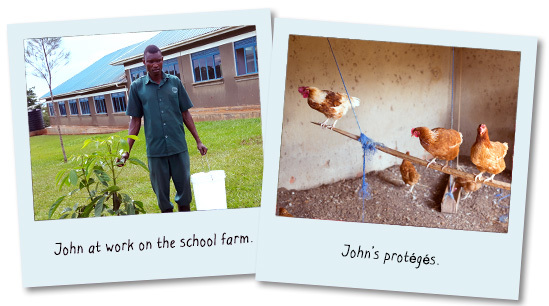 John is a positive person who never complains. He experiences his responsibility as a task and a gift. While his early illness robbed some of his intellect, life endowes him with unusual empathy. He loves people, animals, his uncle, his work. He finds happiness in many things. And his luck is also on others. That is probably why our students visit him during almost every break.

Recently, I participated with John in a “run for fun” organized by the neighbouring parish to help repair their church roof. Kids of Africa provided a contingent of 48 young runners. Early in the morning we arrived at the church square. It was misty and muddy. It had been raining heavily during the night. Millions of one-day flies were buzzing in the air, getting stuck in your throat with every breath. John and I started next to each other. But after seconds John was seen only from behind. It was more than impressive. He ran, no, he ran as if he had unlimited condition. While he completed the ten kilometers as the overall winner in just 32 minutes – in flip-flops – I needed at least ten minutes longer for the same track. We welcomed at the church square. He seemed as rested as at the beginning of the run. 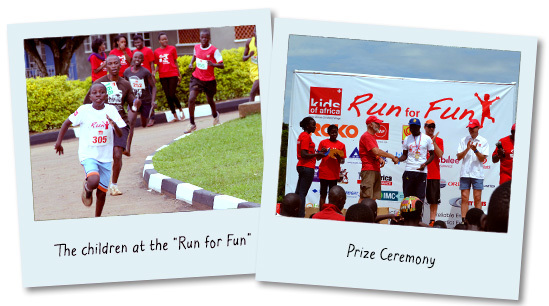 I enjoyed fresh water exhausted and together we applauded the other runners. Until, a little later, the sky seemed to open and a torrent of rain, unprecedented even for Central Africa, hit us.n We sought shelter in the church room. It was an almost magical moment. Through the windows intense morning light came in, while the rain pelted the holey roof with deafening noise. But even before the rain subsided, John and three students spontaneously went to the drums in the church room and improvised. Her rhythmic drum roll silenced the steaming and sweating runners. It was one of those unplanned great moments that can enrich life so unexpectedly. The four increased their virtuosity as if they had played together for a lifetime. Only a deep trust among the players, but also the electrifying power of the rhythm can make such moments possible. Rarely have I experienced such a celebration of the community, the joie de vivre. Magic moments like these awaken great gratitude. To everyone who makes such a good life possible for the children of Africa’s protégés. Everyone knows that. That is why I want to and should address you here in your name: Many, many thanks!